WIN AN AMAZING DAY TRIP TO FOR 4 TO THE TATTERSALLS IRISH 2000 GUINEAS! 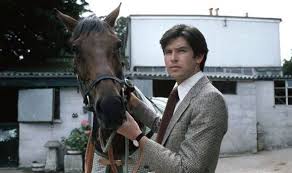 The latest coup story we bring to you for your enjoyment is arguably the most infamous in betting folklore – the Gay Future coup of 1974. True estimates of the total amount landed have never been revealed, but figures of £100,000 to £300,000 are consistently rumoured – this would have ensured a payout of between €5m to €10m in today’s money. No wonder people look back fondly on it, and a film on it was produced in 1980 starring Niall Tobin as the brains behind the operation, Cork businessman Tony Murphy, and Pierce Brosnan as trainer Edward O’Grady – the name of the film? “Murphy’s Stroke”!

This racing controversy, in 1974, absolutely stunned racegoers everywhere, and will be well remembered by all of you long-term punters out there, who can recall most of the cogent details regarding the affair, so, logically, I will be mainly aiming this survey at the present-day fraternity, who for one reason or another would be only guessing as to what really went on, in the convoluted lead-up to the betting coup, and the extraordinary aftermath, reports of which were indeed hitting the headlines for many days afterwards. I will be going over most of the important happenings that made the caper possible, and the totally unexpected turns that went on in this well organised event. No matter what final conclusions you will come to at the end of the article, there is no question but that this was one of the most amazing coups in betting history.

All of the best-laid plans in any venture have to be worked out to almost the final stroke, and this was very capably done by a consortium led by the Cork-based building contractor, Tony Murphy, who was aided and abetted by what one could call a hand-picked group of people, all of whom had some potent connection with the racing game, and with betting in particular. The publicity given to this group throughout the whole exciting episode was such that the general media christened the Tony Murphy-led team as “The Cork Mafia!”

The first part of the plan was to get the right horse, which the team very soon accomplished, buying a young horse out of the John Oxx stable for a bargain price of £6,000. This horse was named Gay Future, and soon he was sent to the Tipperary stable of Eddie O’Grady, to be trained with future races in mind.

Eventually, it was decided to send the horse across channel, by ship, to be trained by Tony Collins, a little known Scottish trainer, whose stable was at Troon. Now, this was where the second stage of the plan was then put into operation, for they didn’t send Gay Future, but a horse of similar colour and make-up etc, leaving Gay Future with O’Grady to get the expert training he required to make him ready for the coup attempt. The preparation of the rest of the plan took the best part of a year, until it was decided to make the attempt at the Cartmel meeting, in a hurdle race, on August Weekend, 1974.

In the weeks leading up to the Cartmel race, the real Gay Future was sent over to trainer Collins for his final preparation, and was kept under wraps, while Collins still presented the look-alike horse, whose form was negligible, to all callers as Gay Future. Now, at that time, Collins also had two other horses in his stable, Opera Cloak and Ankerwyke, both of whom were to become an intricate part of the whole escapade. When the Gay Future entry at Cartmel was confirmed, Collins also entered the other two horses in different races around the country, with all three horses down to run on the same day. All of the ingredients were now in place to complete the mission.

Cartmel was regarded as ideal for their purpose, for, at that time this course was not covered by the “blower”, which is the direct link between the course and the betting shops, and made it a sitting duck for the coming betting coup.

The “Cork Mafia” then got busy, on the morning of the race, to organise their forces for the assault on the off-course bookmakers with their bets, which also had an interesting twist about them. The system was that all three horses in every bet would be covered in combinations of doubles and trebles, which ensured that if Opera Cloak and Ankerwyke were non-runners, that all of the money would then go on to Gay Future, making it imperative for him to win if they were to pull off the coup. Their representatives at the Cartmel track were instructed not to back Gay Future in any way in the betting ring, which of course caused the horse’s price to drift, until it stood at an amazing 10/1.

To further ensure that the price would drift out, one of the stable’s employees procured a large bucket, which he filled with water, and then added a couple of fistfulls of soap flakes to it. He then stirred it up until he produced a nice foamy mixture, and before taking the horse into the parade ring before the race he proceeded to coat the horses neck and front parts with the foamy liquid, to give the impression that Gay Future was sweating badly, to further discourage any of the other punters around the course from having any money on the horse. So now, all was in place to bring off what was later to be rated one of the betting coups of the century. The money was down, the horse was ready, and he now only had to win the race.

The announcement of, “The horses are now leaving the parade ring” rang out from the public address system at the Cartmel course on August Monday in 1974, and set in motion the final chapters in this very amazing betting coup.

On the way down to the start of the race, the Ulveston Hurdle, Gay Future’s jockey, Mr. TA (Timmy) Jones, who had arrived just about a half-hour before the race, was agreeably surprised as to just how well his mount had been prepared, and, by the look of what was against him, Jones, who was then one of the better riders in Ireland, felt very confident as to the eventual outcome.
At this stage of proceedings, all of the betting money was down, with the money spread over a wide area in England, in off-course bookies shops.

All of the stake money was put on by six hand-picked people, who had travelled around throughout the morning of the race, coupling up the three horses, Gay Future, Opera Cloak, and Ankerwyke, in bets of £5, £10, and £20, and confining their wagers to doubles and trebles. This, of course, effectively served to hide Gay Future from the prying eyes of anyone who would tweak as to what was going on. As for the other two horses, Opera Cloak was entered at Plumpton, while Ankerwyke was down to run at Southwell on the same day. The intentions of the coup was that these two horses would be withdrawn, leaving all of the stake money to go on to Gay Future, as per the rules of the time. Ah, the best laid plans!

It looked a near certainty that, on the course, Gay Future’s starting price would be returned at around 10/1, which made the returns very promising.

In the race, Gay Future took the lead early, and, jumping like a stag, made all the running to win easily, at the expected price of 10/1. All’s well, so far.

Of course, bookmakers didn’t come up in the last boat, for, during the morning, a few of them had noticed a distinct amount of bets involving the three horses, so, branches contacted branches, and the various main firms got into confab about the strange goings-on in the Cartmel betting ring.
Unfortunately, for them anyway, as there was no direct ‘blower’ contact with the course, any actions to soften the blow as regards their potential losses were much too late, for, in fact, as they say, the bird had flown right away!

The other two horses by this time had been withdrawn from their races, the excuse given being that their horse-box had broken down in transit, so the final pieces of the jigsaw were almost all in place, and all that needed to be done now was to collect the winnings. While the bookmakers felt that they had been hard done by, they appeared willing enough to take their beating, until an astute newspaper reporter, late on the same evening, very suspicious about the whole odd situation, decided to ring the trainer’s establishment in Scotland for some clarification on the withdrawals, and was told by a member of the household that the two horses involved had never left the yard all day.

This really put the cat among the pigeons, and became the first chink in the unravelling of the whole plot, which, bit by bit, began to fall around ‘The Cork Mafia’ like the proverbial deck of cards. Bookmakers, never slow to act, saw very quickly that the chance to put the clamps on any pay-out facilities was a very live possibility, so they moved with all speed to put up the shutters. This attitude was quickly adopted by bookmakers in general, although it was rumoured that one of them, who did pay out on the bets, allegedly said that, “This was all just a battle of wits, in which on this occasion I sadly lost!”

Naturally, and on account of the vast publicity given by the media to the whole event, an enquiry was bound to be held, in which Tony Murphy and Trainer Collins were charged with conspiring to defraud bookmakers. Both were found guilty by the jury, which was heard at the Preston Crown Court, and received a nominal fine, but were both warned off British racecourses for a ten year period. The sitting magistrate expressed himself full of admiration for the expert way in which the coup was carried out, for, although sometimes sailing very close to the wind, everything was completed in an exemplary manner, such as, the right horse ran, and all bets were paid on, well before the race. Coups like this are always known in the game as ‘Starting Price’ jobs, and are carried out fairly regularly throughout every season, with little or no repercussions from anybody in the higher echelons of racing. It must be remembered that not all coup attempts are successful, for it is reckoned that the vast majority of them fall by the wayside. One very cogent story did come out of the Gay Future affair, when, allegedly, a few bookies were asked the question of:- Would you have given back the stake money if Gay Future, seeing that it was a hurdle race, had fallen, or was in any other way beaten on the day? Well, the answer that came back was a resounding no, so, by virtue of this situation alone, the ‘Cork Mafia’ should have, without question, been paid every penny of their winnings. Sauce for both goose and gander!

We hope you enjoyed that great tale, and if you have any great tales of your own, feel free to contact us……….