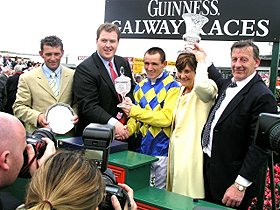 A classic example of a well executed coup was landed by connections of Bocaccio in a modest handicap at Leopardstown, on a non-descript evening in the summer of 2004. Typical of other coups outlined in our previous blogs, a group of associates were given the horse’s name just 30 minutes before the start of the race, then placed hundreds of bets off-course, ensuring they wrote down the live on-course price relayed from the track to the betting shops. In the space of 10 dizzy minutes, the odds on Bocaccio tumbled from 6-1 to 5-1, then 4-1, 7-2, 3-1, 5-2 and, finally, 9-4. The precise timing of the bets meant the damage had already been done as most had got on at 6/1. Trained at Fenpark Stables by Michael Grassick snr, father of Racing Tours Ireland’s Michael Grassick, Bocaccio waltzed home and landed a reputed €1 million plus for connections, though some tales report that it was even more.
Only a handful of the schemers knew which horse was to be backed. The others, who placed most of the bets, got Bocaccio’s name just minutes before the horses showed. Each member of the hit squad had instructions to place €500 on behalf of the group. This done, they could cash-in with a self-funded follow-up. One smooth operator, the story goes, left Leopardstown with €600,000.
Scepticism surrounds some aspects of the story but, even allowing for embellishments, there’s no doubt that the sting was a sizeable coup. The bookmakers suffered collateral damage when ordinary punters, tracking the very odd odds on Bocaccio, joined in the last-minute betting rush.
Charles Lee, Trading Manager with Paddy Power, ruefully said “It was a nice touch, well executed. Coups like this have happened before and will happen again. You get several every year, although this one seems to have been on the more substantial side. Somebody could have been waiting for a while for that horse. It seemed to be a well-planned gamble. Bocaccio’s last win in Ireland was in June 2002 at Leopardstown. It then ran 13 without a win here and spent last year in England. It had also come down in the handicap weights so it might have been carrying a stone less than on its last Irish outing. Then there’s other factors, like the ground and the horse’s form. Horses lose form from time to time and then come back to themselves, just like people can be out of sorts or feeling great. Bookmakers can’t monitor every horse, everywhere, all the time. If it was an exact science, no one would ever bet because the bookies would win all the time.”
Or so they would like us to think!

CLOONE RIVER – JULY 2004
As we have entered the month of July, that can only mean one thing – the Galway races are on the horizon! Seven days of absolute magic start every year in the “party city” on the last Monday of July. One of the great life-affirming weeks anywhere on the planet, part of the Galway Races’ enduring charm is that they remain a choice destination for the sort of meticulously planned plots that make horse racing such a unique sporting lure. 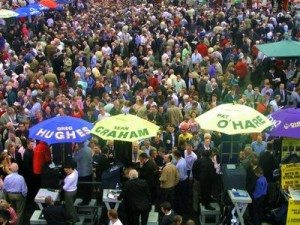 Of the countless gambles that have been landed each year at Galway, one of the great recent ones happened in the 20004 Galway Hurdle, when Cloone River landed a colossal local gamble. Trainer Paul Nolan hatched a daring long-term strategy after Cloone River hit the post when second in the same race the year before. Convinced that his charge was unlucky, Nolan resolved to protect the eight-year-old’s revised 6lb higher handicap mark by not running him over hurdles until the showpiece came round again 12 months later. It was a high-risk ploy, but Cloone River’s much-improved form on the Flat in between suggested it was also a crafty one. Having been backed at ante-post odds of 12/1, John Cullen’s locally owned mount plunged from 7/1 on-course to return the 7/2 favourite. He nearly got brought down early on, but Nolan’s plot was vindicated in spectacular style.
Being owned locally by Kathleen and Bernard Gillane of Gort, only 20 miles away, it was hardly a surprise that an avalanche of money came for the gelding. Even less of a surprise was the wild celebrations at the track and all around Galway that night. Further colour was added by the popular trainer, who was certainly feeling the pressure. He told RTE’s Tracy Piggott “The tension was giving me pins and needles up my left arm. I may go for a check-up.” In an effort to create some private space for himself, Nolan opted to watch the race from the in-field on the giant screen. But the all-seeing television camera zoomed in on his every reaction as Cloone River, first, struggled to overcome interference in running. Nolan was then seen racing on the inside rail after the horse as he came home up the Ballybrit hill!
“I’ve never been so affected by a race,” the Enniscorthy trainer added. “I just wanted to get away. I thought I was going to have a heart attack. I was worried he hadn’t run in a hurdle for so long and I was hoping nothing would happen.”
Subsequently, as is often the case in Irish horseracing, Cloone River’s great victory was immortalised in verse:
“Cloone River, winner by a mile,
Coming home in style at Galway.
Wherever you’re going,
We’re going your way.
Two drifters off to see the world,
There’s such a lot of world to see.
We’re after the same rainbows end
Around the final bend,
My Galway Hurdle friend,
Cloone River and me.”

A little personal footnote to that story involves myself and a friend and the B&B in which we stayed in Galway that race week. We were given a warm welcome, our hosts could not have offered us more hospitality. In our brief periods under their roof from Tuesday to Thursday, our hosts discussed the races with us and clearly knew a thing or two about racing. We almost became like old friends who tell each other everything – almost. As Cloone River was heading back to the winners enclosure I was nearly flattened by a woman as she excitedly raced by – it was our B&B landlady! In response to me asking why she was so wildly excited, she shouted back as she ran off “My brother owns the winner!!” For all their wonderful hospitality she’ll failed to offer up that nugget of information over breakfasts. She duly apologised the next morning for not divulging, but there was no need to, we completely understood. 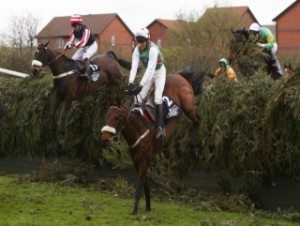 Monty’s Pass was ridden by Co. Meath man Barry Geraghty, trained by Co. Cork based Jimmy Mangan, and ran in the ownership of the Dee Racing Syndicate, a group of owners based in Co. Down, led by Blackpool born bingo hall owner Mike Futter.
Monty’s Pass had been a high class horse, running regularly at the big racetracks and festivals, with his biggest success before the Grand National coming in the 2002 Kerry National at Listowel, where he landed bets yielding £200,000 in the process. That in itself was a spectacular coup, but was nothing compared to what was to follow.
The horse was lightly raced over hurdles in preparation for the 2003 Grand National in order to protect his handicap and was the subject of a huge gamble by the public on the day of the race, which saw his price tumble from 40/1 to 16/1 at the off. The horse won in what was considered by racing pundits to be one of the strongest Grand National fields of the previous two decades, landing a huge gamble of over £1 million for his owners in the process. The meticulous preparation that led to Monty’s Pass’ price being so big in the months leading up to the biggest betting race there is, was the brilliance of this particular coup.
Futter said after the race “I started backing him at 66-1 before the weights came out. Then I backed him at 50-1 but then after he was tipped up in the Racing Post the price got shorter – and then I had a bit more at 25-1. The biggest bet was one of £10,000 at 50-1. I reckon I have cleared £800,000.” Futter owned a series of Bingo Halls in Ireland and had tipped off his customers. He reckoned the customers had won over £1.2m. 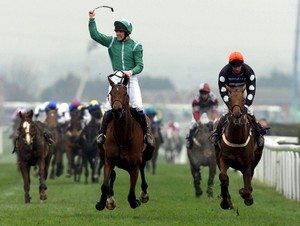 If Monty’s Pass is said to have netted owner his owners over £1 million in 2003, an even bigger Irish gamble had been landed just 3 years previously, when the British and Irish public got behind the momentum of the gamble behind Papillon when he won the Grand National in 2000.
Trained by Ted Walsh in Kildare, and ridden by his son Ruby, they executed a massive Irish gamble which cost English bookmakers an estimated £10 million.
Papillon was ranked as one of the outsiders at 33/1 the day before the race, but a huge overnight flutter brought him into 10/1 at the start of the race. Speaking afterwards Simon Clare of Coral said “this was the biggest National gamble in living memory”. David Hood of William Hill said “Punters wll be celebrating until Christmas and will need wheelbarrows to collect their winnings of the best part of £10 million.”
Walsh junior had Papillon up with the leaders for the second circuit of the race, took the lead three fences from home and held on to win by one and a quarter lengths, Walsh jnr. saying “My fella just kept picking up and picking up and once I reached the last I never thought anything was going to get past me.”

DON’T PUSH IT – APRIL 2010:
While technically not an Irish winner of the great race in 2010 due to the horse residing in the UK, the masterminds and the men who delivered one of the biggest ever blows to British bookies were all Irish: Don’t Push it was owned by JP McManus from Limerick, trained by Johnjo O’Neill from Cork, and ridden by Tony McCoy from Antrim! 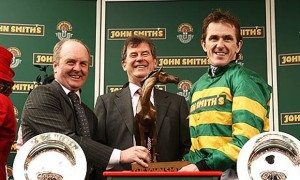 A monster punt from 20/1 to half those odds on Grand National morning it was estimated to have cost the betting industry £50 million!

The final gambles to be brought to you in this blog series are both modern day coups, but as they both involve the legendary Barney Curley, with whom we opened the series with his Yellow Sam sting, it is only appropriate that we give the stage to Barney himself in our next blog post.
Until then, if you have any great coups that we have missed here, let us know through here, our facebook page, or twitter page – we can’t wait to hear them!