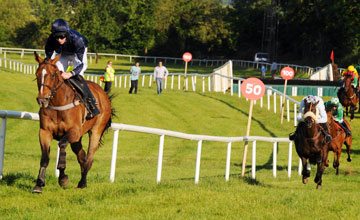 For our latest tale of great coups in Irish racing (we’ll take the Gay Future plot as an Irish racing coup in the UK), we come up to more recent times, namely June 2010, and the D Four Dave coup at Kilbeggan racecourse, which will be part of a couple of our day tours from Dublin this year.

It was an audacious gamble that nearly went off like clockwork, although, as ever, reports vary as to exactly how much was reaped from the coup.

A fleet of drivers were deployed to place bets at more than 100 different bookies in an elaborate betting coup to land up to €200,000. The masterminds won the six-figure sum by paying a massive team to each back the winning horse with small stakes of €200 each, at long odds of as much as 14/1.

The Irish Bookmakers Association reluctantly saluted the audacious gamble, admitting: “It’s a classic. They did nothing illegal.”

Businessman Douglas Taylor, the joint-owner of the horse at the centre of the plan, is understood to have reaped a share of the rewards. “That should pay for the wedding,” said Kilcock-based Mr Taylor after his horse ‘D Four Dave’ romped home in Kilbeggan. He had enjoyed a successful week, having only tied the knot on the previous Saturday.

Mr Taylor is the managing director of recruitment company MCR, which is understood to have been involved in bringing together the people power to pull off the plan. Up to 200 agency workers arrived at betting shops at 6.55pm on Monday evening, when an alarm on a watch sounded the signal to place the bets on ‘D Four Dave’.

They were given strict instructions to be at the counter before the alarm went off. They were told to tell staff they would take the odds available, which were as high as 14/1 before later falling to 5/1.

The horse’s win under jockey Mark Walsh just minutes later, hit some of the leading national bookmakers for big money, thanks to the carefully orchestrated wagers. As relatively small €200 bets were all placed at the same time, just moments before the 7pm Hurley Family Handicap Hurdle, the punters were able to avail of favourable odds. If big money had been laid on the horse earlier in the day then the bookmakers would immediately have become wary and slashed odds on the horse. However, the sophisticated gamble was landed in style, as drivers were dispatched to more than 100 bookmakers in counties Dublin and Kildare.

The agency workers who had been given an envelope containing instructions to pull off the audacious coup. The remarkable instructions in full were:

“Dear Employee, enclosed you will find:
A completed betting slip for the bettingshop that you have been sent to. €200 in cash for which you need to place the bet.
You should also have a watch with an alarm set to go off at 6.55pm. Your job is to place the bet exactly when the alarm goes off at 6.55pm. You need to be at the counter before the alarm goes off to be in position to hand over the betting slip and say to the person at the counter “I WILL TAKE THE PRICE”.
When the person hands you back the betting slip you will pay over the €200. You then have to place the betting slip back into your envelope and return the slip immediately to your supervisor/driver along with the watch when he comes to pick you up. You can then return with your driver/supervisor to MCR office to get paid.
Thank you.”

Reports suggest that if it all had gone to plan, the owners would have made over €200,000, but between the jigs and the reels some of those hired – many of whom are believed to have been foreigners with a poor grasp of the English language – didn’t understand the instructions completely, and in the end the final tally may have been considerably less. Still, these days, it goes down as a rare and successful coup.

Racing Tours Ireland salutes Mr Taylor and old-fashioned coup in the modern age, and if you have any other notable gambling tales, please share them with us………..