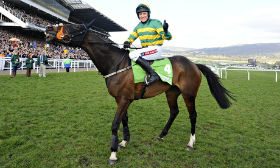 To celebrate the second best Monday morning of the year, the second last Monday before Cheltenham (and the best one only 7 days away), Racing Tours Ireland is going to get on the online Road To Cheltenham 2015, and throw in its tuppence worth by revealing its much coveted (?) tips for next week’s racing and betting bonanza in the Cotswolds. The concept of “The Road To Cheltenham” has started and grown rapidly in recent years, although it’s now more like “The Spaghetti Junction To Cheltenham 2015” with all the online traffic and preview nights out there. But isn’t it all great fun, with many of the previews for great causes like the Irish Injured Jockeys. Unperturbed, Racing Tours Ireland will boldly go and put its neck on the block in the run up to the throw in next Tuesday, with updates of any on-course and in-pub whispers live from the Cotswolds. This boldness stems from the combination of all the latest whispers and spoutings from our day trips and tours around Ireland and its racecourses and the Cheltenham preview nights…………so stay tuned and feel free to endorse or slate!

Often when having a bet, the intrepid punter has to choose between the heart or the head, and I don’t mind admitting that when it comes to a clash between the 2, I always let the heart rule – sure wouldn’t it be a duller oul world if the head was always let rule the heart. Sometimes, the punter can find himself in the nice position of when both the heart and the head are in agreement with eachother, and that is the case with Racing Tours Ireland’s Champion Hurdle selection of Jezki, trained by the Racing Tours Ireland stable of Jessica Harrington.

To start with the case from the heart. As with many who like to place a bet on horseracing in Ireland, I do look positively on the chances of horses that have done me favours in the past. And given the almost farcical circumstances in which Jezki did me a huge favour when winning last year’s champion hurdle, I’m almost obliged to be with him again for this year’s race. To briefly fill you in……I hadn’t made the best of punting starts at last year’s festival, and after just 3 races (and the unbelievable chinning of Champagne Fever in the Arkle), a slightly ominous feeling was coming over me. Still, there were still 24 races to go, and Barry Geraghty had rides in most of them – “Barry the Great”, as opposed to my own “Barry the Brother”, is my go-to-man at every juncture. I fancied Jezki and My Tent Or Yours for the upcoming champion hurdle, and after much torture and mind-changing, I sided with Geraghty, and therefore, Jezki. Mind made-up, it was time to phone in my bet from behind the Cottage Rake bar at the track, overlooking the wonderful winners enclosure. But, there was absolutely no reception on the phone – Cheltenham racecourse nails nearly absolutely every detail during the festival, but the phone coverage is dire, and I’m sure has cost (and saved) many a punter over the last few years. With not long to post-time, panic kicked in as I wanted to put on a fair bit more than the cash in my wallet, and my friends were off doing their own thing and didn’t need to be spotting me a few quid so early in the day. Find a payphone I thought! So I went scampering around looking for a payphone to call the bookie – of course, there’s never a payphone when you need one. I was racing around the enclosures looking for a payphone, eventually finding one up 3 flights of stairs, near the Fred Archer memorial for those who know it. Inevitably, there was someone using it (Barney Curley accomplice-style). However, she soon finished up and I had my chance. But, I had no change for the phone, and there were only minutes to the off. Panic levels ramping up, I wondered whether the bookies freephone number would work – hardly – but I dialled it any way, and after about 10 eternal dial tones, I got through – I didn’t even have to ask if they’d accept an old school reverse-charge call. Absolutely ecstatic to get through, I had more on than I planned to on Jezki, as surely the Gods are telling me something here! My near half-hour crusade over, on my way back to watch the race, I decided to do a reverse forecast on the Tote on My Tent Or Yours and Jezki, just in case……………well, you should know the outcome of this story, but let’s just say Jezki won my heart that day!

I’m not telling you this to gloat in any way, I’m in no position to do that – I’ve backed more losers than there are things to do in Dublin – but it’s just to give you the heart argument for selecting Jezki again this year. Throw in the fact that he is trained by Jessica Harrington who is part of Racing Tours Ireland’s stable tours, then you’ll understand why the heart says “Jezki first, the rest nowhere!”

Now for the more difficult, though not too difficult, reasoning from the head.

As reigning champion hurdler, Jezki has that gilt-edged course and distance form, at the festival. Year after year, the same horses return to confirm form, or bounce back to form, at the festival. As a 7 year-old, Jezki may not have reached the height of his powers yet, and his form going in to this year’s race is better than going into last year’s race, after which he was mightily impressive when winning like a champ at Punchestown. With spring in the air, there is every chance it won’t be too soft for him, and all reports suggest that he is in fine form at home. He may not have “Barry The Great” on board this year, but has a certain Tony McCoy (for whom there isn’t a moniker short enough to lay out here). If you’re a ratings fiend, Jezki is joint second highest rated at 168 (just 1lb behind Hurricane Fly), and is top rated on Racing Post Ratings. Throw in his “working man’s” price around the 5/1 mark, and what’s not to like?

Obviously, no champion hurdle is easily won, and in Faugheen he faces a particularly exciting “machine”. However, at prices around even money I find it can pay to try and find flaws in a horse before jumping in at the expensive end, and I have a nagging feeling about his own jumping at 2 mile championship pace – he took a good few hurdles with him in winning the Neptune last year, but he won’t get away with that against the field for the Champion Hurdle 2015. I’m happy to leave him win unbacked at evens, and salute a potentially great horse if he wins. Speaking of great horses, you couldn’t rule out “The Fly” altogether. Legends tend not to go away easily, and he has been brilliant so far this season, so there will be plenty of “heart-arguments” in support of him this year. It’ll be a story for the grandchildren if you are there next Tuesday and Hurricane Fly bounds home first, and it could well happen, although all the stats (most of all his age) are against him, and stats being stats, they are cold hard facts based on past evidence, so they have some credibility. Of the remainder, The New One is a cracking horse, but may just lack the speed to beat every last one of them, and his price of 3/1 seems ridiculously short to me. Arctic Fire is a widely trumpeted dark-horse, but if he couldn’t win a County Hurdle of 141 and carrying only 10-13 when Jezki was winning a champion hurdle, it’ll take a ridiculous amount of improvement from him in the space of 12 months (although I maybe speaking through my pocket after that County Hurdle).

As Metallica might say, nothing else matters, so it’s Jezki all the way, in both heart and mind! See you for a bit of Metallica head-and-heart-banging celebrations in the 21 Club if it happens.

Racing Tours Ireland is now up and on the Road To Cheltenham 2015!