Things to do in Dublin this Easter 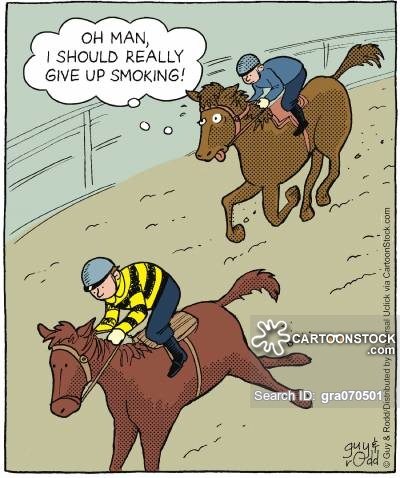 Racing Tours Ireland features Navan quite regularly on its day tours from Dublin, and one of our favourite little racing tales, along with the great betting coups which we will be bringing to you soon, involves a horse called Young Whack. This tale might make you wonder the next time you see steam (or smoke?!) rising from a horse’s head………

It is doubtful that Young Whack had a cheeky drag of a cigarette behind the stable block to calm the nerves before winning at Navan in May 2001, but later the same day Noel Meade’s chaser tested positive to nicotine!

While there is still no explanation for the extraordinary discovery, believed to be the first case of its kind on either side of the Irish Sea, the Turf Club had no option but to disqualify the seven-year-old.

Although dismayed at the unsolved mystery, Meade managed to see the funny side of the episode, saying the great line: “Young Whack will make a hell of a horse when we get him off the fags.”

Meade was unaware that nicotine was a banned substance until informed of the result of Young Whack’s urine sample following his victory, saying “We’re flummoxed about how it happened-there’s no horse in the yard on anything that would suggest he could have got something by the way. The Jockey Club vets and those from the laboratories are fairly lost for an explanation as well, although nicotine has apparently come up a couple of times in tests in France, and Dr Maire O’Connor, the Turf Club veterinary officer, is going to look into that to see what the connection could be.”
Meade added: “It’s worrying that something has shown up that we have no explanation for, and the fact we have lost a novice chase is one thing, but if we had lost a serious race it would be very upsetting.”

Young Whack went on to race until 2004, and his apparent liking for a smoke didn’t prevent him winning a further 4 races, ultimately moving from Meade’s yard in Co Meath, to British based Howard Johnson. No explanation was ever forthcoming about Young Whack and his nicotine sample, but to our minds at Racing Tours Ireland, he may simply have munched on a packet of cigarettes left behind in his box……..do you have any thoughts, funny or sinister? Let us know by leaving a comment here, on Facebook or Twitter.