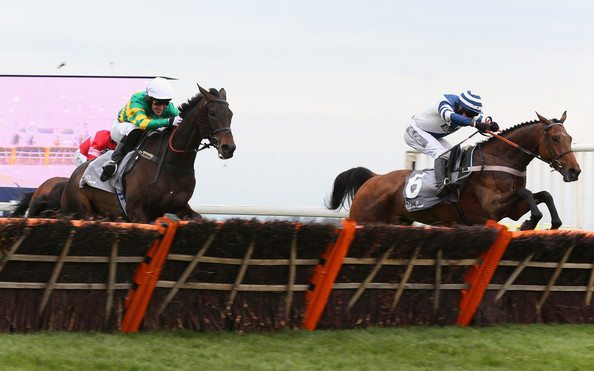 The traditional highlight of the Thursday (since the 4 day format) is the stayers’ World Hurdle. For Racing Tours Ireland, no other race has provided more reasons to be its most memorable at the festival – painful reasons! Year after year, I’ve often found myself to be most bullish about the Stayers’ hurdle above all the other races. And the litany of heart-ache (or shame?) lingers on – hopefully I can exorcise them once and for all here. I could be on my shrink’s couch getting charged overtime as I lament the likes of Le Coudray in 1999, when, upon hearing Charlie Swan think he was a certainty at a Cheltenham preview in Gowran Park in Kilkenny, myself and friends took the 10/1 freely available a few weeks before the race. Touching nearly evens on the morning of the race (went off 2/1), we naively thought he was home and hosed, until Norman Williamson on Lady Rebecca inexplicably took Charlie and Le Coudray what seemed like a hundred yards wide around the final bend. After Le Coudray eventually mastered Lady Rebecca and scooted clear, his extra yardage caught up with him and he had nothing left in the tank to resist the Richard Johnson ridden 40/1 shot Anzum, who, having been beaten, swooped from the clouds and chinned Le Coudray on the line – a very harsh lesson to never count your chickens etc.

The hall of pain continued on with Charlie Swan again, sauntering along on Bannow Bay coming into the bend in 2002, and it only a matter of time until he pushed the button to romp home. Unfortunately, when Charlie pushed the button, there wasn’t enough there to repel Baracouda by a narrow neck. A year later, Baracouda went and crushed Irish hearts and bets again, when the great Limestone Lad could only manage third to the great French stayer. Probably the biggest heartache in this race happened in 2006, when my festival banker, Golden Cross, under Johnny Murtagh couldn’t reel in My Way De Solzen by a diminishing head, kyboshing my ante-post double-figure bets. There was much debate in Cheltenham that night about flat jockeys versus jumps jockeys……….Golden Cross’ trainer Michael Halford has since got over that heartache and established himself as one of Ireland’s very top flat trainers, and we are delighted to have him as part of Racing Tours Ireland’s stables.

Even since Golden Cross the World Hurdle hasn’t been very kind to me, with misguided blind persistence that Oscar Whisky could topple Big Bucks in 2012, or definitely take the throne in Big Bucks’ absence in 2013. 15 years of pain was then topped off with Annie Power’s near miss last year. So, despite one very substantial beacon of joy in the race with Iris’ Gift in 2004 (of course ridden by Barry The Great), it’s surely time that the World Hurdle gave a little back to me and Racing Tours Ireland!

Even with the law of averages on my side (no World Hurdle winner backed since 2004), this year’s renewal does seem particularly hard to crack, with 5/1 the field, and 13 horses at 20/1 or under. Surprises are rare, with Solwhit at 17/2 the biggest S.P. this century. There are a couple of other general pointers in assessing the race. Despite being over 3 miles on the stiffer new course, the race’s usual steady gallop favours speedy types. The winners invariably have good form at much shorter – rather than being pure 3milers. Solwhit had won 6 Grade 1s, 5 over 2m. Inglis Drever won two Grade 2 Champion Hurdle trials over 2m the season he first won, and had been 2nd in the Neptune the previous season. Bacchanal won the Gerry Feilden, (which was then seen as a Champion Hurdle stepping stone,) over 2m the season he won. Last year, More Of That was having only his 5th career start when winning and hadn’t raced beyond 2m4½f, showing lots of speed to win the Grade 2 Relkeel the time before.

It’s also worth noting that it’s rare for a horse that’s been beaten in a World Hurdle to win it in the future. The only winner this century who’d been beaten in the race before was Iris’s Gift and he was a novice when a close 2nd to Baracouda. That’s different from more exposed types this year like Zarkandar and At Fishers Cross winning, and so I am happy to discard those two this year.

The most significant trial this year appears to be the Cleeve hurdle run over the course and distance in January, in which Saphir Du Rheu beat Reve De Sivola by a neck getting 4lb, with Un Temps Pour Tout 2½ lengths behind on his seasonal debut (and getting 2lbs and 6lbs respectively). Clearly there is not much between them, and an argument can be made in favour of any of them. As it’s so close, and it’s tough to choose one over the other, I’m happy to look elsewhere for the bet.

Unfortunately, the Irish record in the race in recent years is very poor, with only Solwhit winning since Doran’s Pride in 1995. Maybe Irish 3 mile hurdle races don’t bare much resemblance to the test that Cheltenham provides, with stamina-laden Irish winter soft ground form being found wanting on the faster spring ground at Cheltenham. This doesn’t bode well for leading Irish hopes Lieutenant Colonel, Jetson (from the Racing Tours Ireland stable of Jessica Harrington) and the Dedigout, although Lieutenant Colonel showed relative speed when winning the 2½ mile Hattons Grace in November. However, if Annie Power shows up, speed and course form will not be a problem, and she would have a leading chance. As it is, she appears more likely to go for the Mares race, although it wouldn’t shock if Willie Mullins decided to go for that race with Glens Melody, in which she would be favourite, and for this race with Annie Power, in which she, too, would likely be favourite.

On the assumption that Annie is ok in the Mares race, I am narrowing this down to 2 horses with festival winning form, over shorter distances, and for whom a steady gallop would suit. Rock On Ruby not only has festival-winning form, but he won the champion hurdle in 2012 (also 2nd in 2011 Neptune), and has won 4 times at Cheltenham in total, including on his last 2 runs. If they go a steady gallop, there is every chance that his speed, class and love for the Cheltenham hill will get him home. The main negative I can see is that he is 10 years old. There is a damning record of horses aged 10 or older who have contested the 4 championship races since 2000 – of the 137 horses aged 10 or over to have run in those races, 136 were beaten. The only winner was the great Moscow Flyer, who won the Champion Chase in 2005 aged 11. That’s a fair stat for Rock On Ruby to overcome – but he might……

That leaves me to come down on the side of Whisper (and Barry The Great, again). He won last year’s Coral Cup, carrying top weight to victory over 2m 5f, giving a very good horse like Bayan 10lbs and a 2½ length beating into third – surely Bayan would have a live chance in this if he hadn’t gone to France yesterday? He then proved his stamina by following up in the 3m ½f Liverpool hurdle, beating At Fishers Cross and Thousand Stars, with Zarkander 9 lengths away in 4th. Zarkander is a favourite for this at as low as 4/1, while Whisper is as big as 14/1. Of course, there is a reason for this, as Whisper has only been sighted once since that Aintree win, when beaten in a novice chase on new year’s day. However, reports from Nicky Hendersons indicate that he is in good form at home, and there’s no-one better at getting a horse ready for Cheltenham than Nicky Henderson. If the horse arrives in top form, his combination of speed, stamina, high class form and Cheltenham form, make him a cracking bet at double-figure odds.

The cherry is Barry The Great on top!